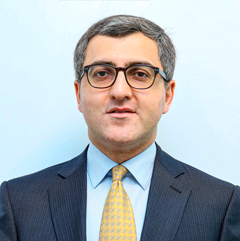 Yusif Ikram oglu Abdullayev was born on 5 June 1983 in the city of Aghdam.

In 1999, he entered Baku State University and studied for a bachelor's degree in international law. He started his professional career between 2004 and 2007, working in sales, insurance, and logistics. From 2007 to 2015, he directed the export department of Azersun Holding. From December 2015 to 1 June 2018, he served as Vice President of AZPROMO; on 1 June 2018, he was assigned to the position of AZPROMO President, and on 8 October 2021, as part of AZPROMO's reorganization, he was appointed to the position of the Agency's Executive Director. 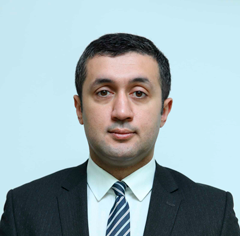 Gadirov Zohrab Shakir oglu was born on 16 May 1982 in the city of Baku.

In 1999, he enrolled at Baku State University and graduated cum laude from the university with a degree in international relations. In 2005, he earned a Master's degree in this field; in 2007, he was awarded a Master's degree at Texas A&M University in the United States of America. Having started his professional career in 2007 he worked at the Embassy of the State of Israel in the Republic of Azerbaijan within the period from 2007 to 2009; from 2009 to 2018, he worked in the banking sector. In 2018-2019, he served as the Executive Director of the Exporters Club of Azerbaijan. From October 2019 to February 2022, he held the position of Director of the Investment Promotion Department at AZPROMO. From March 2022, he held the position of AZPROMO consultant. Since November 2022, he has served as Deputy Executive Director of the Agency.