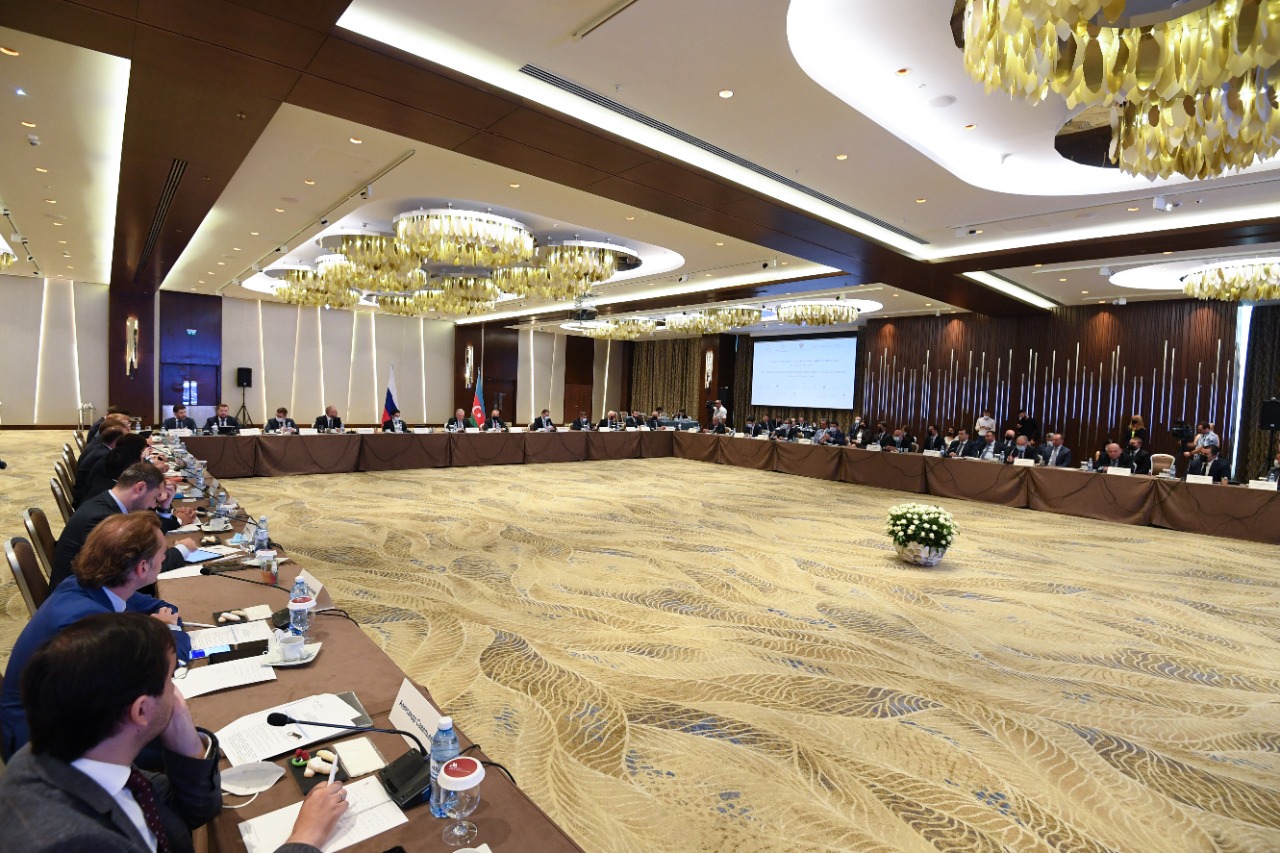 The Deputy Minister of Economic Development of the Russian Federation Dmitry Volvach led a business mission of Russian companies to Azerbaijan. Along with officials, the heads of companies operating in the transport, mechanical engineering, construction, security, consulting, and other fields took part in the business meeting held within the framework of the visit.

Having noted the strategic partnership between our countries, the Minister of Economy Mikayil Jabbarov emphasized that the political will of the presidents of Azerbaijan and Russia, high level of mutual trust and friendship constitute the main driving force of the bilateral relations. The Minister noted the successful development of cooperation in various economic sectors and informed about the progress achieved in the implementation of economic potential, expansion of mutual trade, and investment relations as well as diversification of the commodity turnover structure. It was noted that effective mechanisms are used to strengthen trade and economic partnership. From this perspective, the Azerbaijan-Russia Intergovernmental Commission, Azerbaijan-Russia, and Russia-Azerbaijan Business Councils represent useful platforms. As one of the major trading partners of our country, Russia is the biggest importer of non-oil products from Azerbaijan. Despite the difficulties caused by the pandemic, the trade turnover between the two countries increased in the first six months of this year.

It was noted at the meeting that more than 1,000 Russian companies operate in Azerbaijan with Russian investments amounting to $6.2 billion in Azerbaijan's economy, while Azerbaijan invested $1.2 billion in Russia's economy. Important projects in the field of mutual investment include the establishment of a pharmaceutical enterprise in the Pirallahi Industrial Park, the cooperation of the Ganca automobile plant with the Russian KamAZ plant, and the implementation of joint projects between Azermash and GAZ companies.

The Minister of Economy informed about the favorable business and investment climate in Azerbaijan, noting that the liberation of our territories from occupation led to the emergence of new realities and prospects for cooperation, and invited Russian companies to an active partnership. It was emphasized that the continued establishment of industrial zones in our country and the operation of the Alat Free Economic Zone create additional opportunities to deepen bilateral economic cooperation.

During the business meeting, the Minister of Transport, Communications and High Technologies Rashad Nabiev informed about the activities implemented to ensure the development of the transit and logistics potential of Azerbaijan, the expansion of relations with Russia in the field of transport and ICT as well as the fruitful cooperation of our countries in the development of international transport corridors.

Russian Deputy Minister of Economic Development Dmitry Volvach expressed satisfaction with his visit to Azerbaijan, stressing that his country attaches great importance to the partnership with Azerbaijan and appreciates the special role of high-level reciprocal visits paid in this regard. While stressing the importance of holding events with the participation of business circles to deepen economic ties, Dmitry Volvach emphasized the opportunities for cooperation in such areas as transport, industry, agriculture, tourism, education, etc., urging business people to use the enormous potential and expand ties.

Azer Talybov, Chairman of Roseximbank's Board of Directors, noted the importance of trade and investment partnership between the two countries, including the financing of foreign trade, and expressed interest in cooperation with Azerbaijani banks.

At the event, the heads of Russian companies made presentations about the enterprises they represent and expressed interest in expanding cooperation and establishing new ties with their partners in Azerbaijan to conduct business activities in our liberated territories.

A Memorandum of Understanding was signed between the Ganja Automobile Production Plant and OJSC KAMAZ during the business meeting. The document provides for new areas of cooperation.

The meeting then proceeded to discuss the expansion of trade and economic cooperation between Azerbaijani and Russian companies.