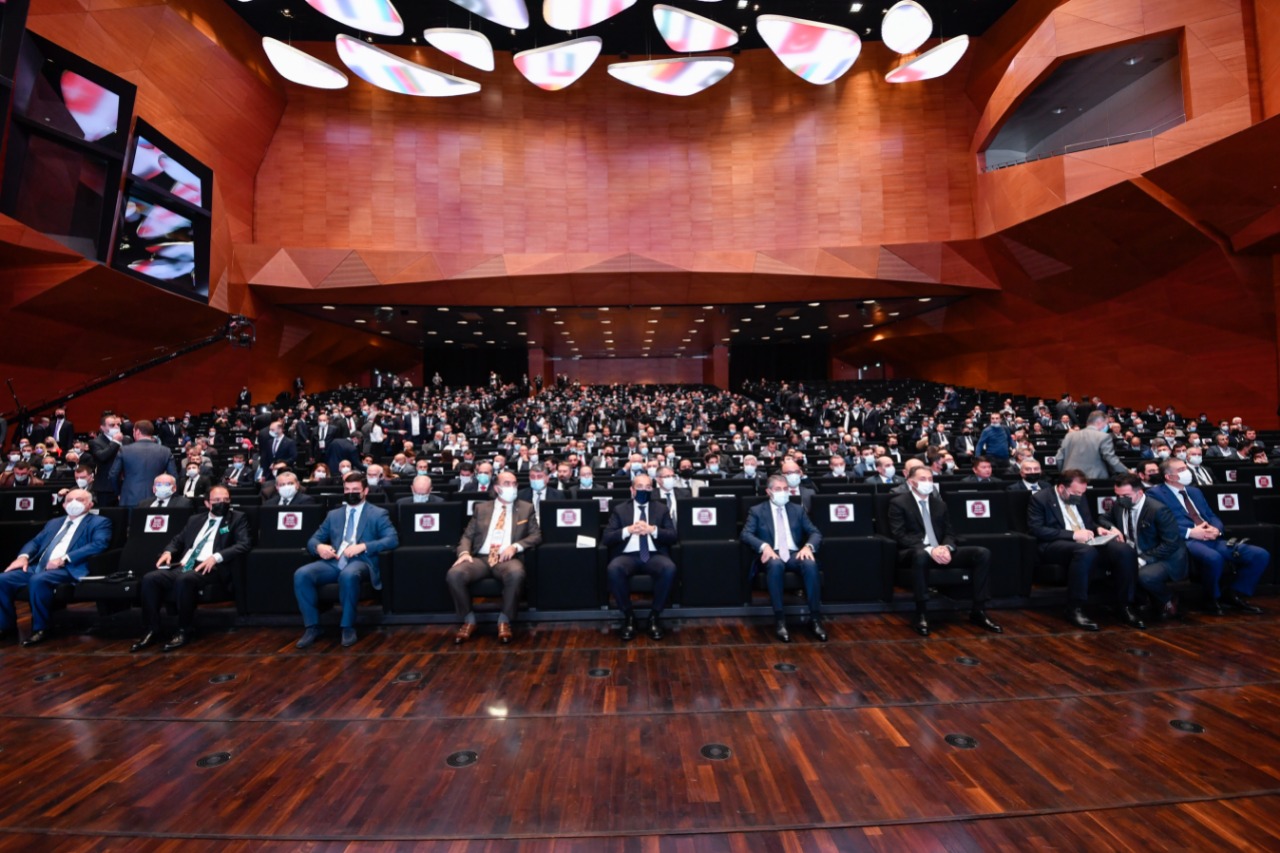 As part of the event, the forum participants honored the memory of our heroes, who died for the independence and territorial integrity of Azerbaijan, on the Alley of Martyrs.

The forum organized by the Small and Medium Business Development Agency (SMBDA), the Turkish Independent Industrialists and Businessmen Association (MUSIAD) and the IBF with the support of the Ministry of Economy of the Republic of Azerbaijan and the Ministry of Trade of the Republic of Turkey was attended by government officials, businessmen, investors, and representatives of international organizations and the diplomatic corps from about 30 countries. The forum under the slogan "Azerbaijan: Pearl of Asia" aims at presenting to foreign investors the investment opportunities of Azerbaijan, including the rich potential of our liberated territories, and expanding trade and economic ties and business cooperation between the participating countries.

The event began with the reading of verses from the Holy Quran in accordance with the traditions of the International Business Forum.

Films about the Azerbaijani-Turkish fraternity, favorable business and investment climate in our country were shown at the forum.

Speaking at the opening of the event, Minister of Economy of Azerbaijan Mikayil Jabbarov emphasized that our country's hosting of the International Business forum for the first time was a significant event, noting the importance of the event in terms of introducing Azerbaijan's business and investment climate to a wide audience, developing relations between local and foreign investors, and shaping innovative opportunities and creating opportunities for the implementation of new projects. Mr. Jabbarov informed about the priority areas of the Azerbaijani economy and the measures taken to achieve the set goals.

Stressing that the development of the Azerbaijani economy, as well as the stable macroeconomic situation have an important role to play in making decisions on the implementation of business projects in our country, the Economy Minister gave detailed information on economic indicators. It was noted that at present, the strategic foreign exchange reserves of Azerbaijan exceed 52 billion US dollars, which is 108% of GDP and more than 6 times the foreign debt. In January-September this year, GDP grew by 4.8%, in the non-oil sector - 6.2%. The share of the non-oil sector in GDP was 64%. Noting that special attention is paid to the development of industry, the Minister talked of the use of advanced tools and mechanisms, such as industrial zones and investment promotion documents, stressing that 6.7 billion manats are planned to be invested in industrial zones, and 6.3 billion manats have already been invested. According to Mr. Jabbarov, over the nine months of this year, non-oil exports grew by 41%, which is the highest figure in the entire history of observations. The export of non-oil products increased 1.6 times. Industrial zones account for $ 320 million in industrial exports, which is twice as much as in the same period last year.

The Economy Minister called on investors for active cooperation emphasizing that Azerbaijan's favorable geographical position, great transit potential, modern infrastructure, regional projects initiated by and implemented with the participation of Azerbaijan are the main factors for attracting foreign direct investment.

The business forum noted that the liberation of our lands from occupation is of great historical, political and economic importance, underlining that President of the Republic of Azerbaijan Ilham Aliyev was awarded the Supreme Order of the Turkic World at the 8th Summit of the Cooperation Council of Turkic-Speaking States for this historic victory, which made an important contribution to the life of the Turkish community and paved the way for lasting peace and stability in the region. It was noted that Garabagh has a wide range of opportunities for regional integration, and the involvement of economic entities of MUSIAD members in reconstruction work will make an important contribution to trade and economic cooperation.

Deputy Minister of Treasury and Finance of Turkey Nureddin Nebati spoke of the active participation of Turkish companies in projects to revive the liberated territories of Azerbaijan, which will make a significant contribution to economic cooperation, revitalize business, create new enterprises and jobs, and also shared views on the further expansion of cooperation and exchange of experience in the field of agriculture, tourism, construction, renewable energy and other areas. According to N.Nebati, the goal of increasing the volume of mutual trade between Turkey and Azerbaijan to $ 15 billion also gave an additional impetus to strengthening cooperation.

In their speeches, President of the International Business Forum Erol Yarar, President of the National Confederation of Entrepreneurs (Employers) Organizations of the Republic of Azerbaijan Mammad Musayev, Chairman of the Board of SMBDA Orkhan Mammadov and Chairman of the Board of MUSIAD Mahmut Asmali stressed the importance of holding the forum in Azerbaijan, creating conditions for establishing new contacts and investments.

A Joint Roadmap was signed between the SMBDA and MUSIAD, a Protocol of Intent on public-private partnership between the State Agency for Compulsory Health Insurance of the Republic of Azerbaijan and the Istanbul Public-Private Partnership Center of Excellence, as well as a Memorandum of Understanding between the Young Entrepreneurs Network Association and Young MUSIAD.

As part of the forum, panels were organized on the investment opportunities of Azerbaijan and public-private partnership (PPP). The panel sessions presented the favorable business and investment environment of Azerbaijan, the investment potential of our country, including in Garabagh, the implementation of PPP projects, Turkey's experience in this area, the role of the PPP model in the process of restoring the socio-economic infrastructure in the liberated territories, and organized an exhibition of goods and services of local business, as well as the activities of organizations supporting local and foreign businessmen and investors in our country.

The forum will also hold bilateral meetings between businessmen, acquaint foreign businessmen and investors participating in the forum with the production process at a number of enterprises, and discuss opportunities for investment and cooperation with local entrepreneurs.