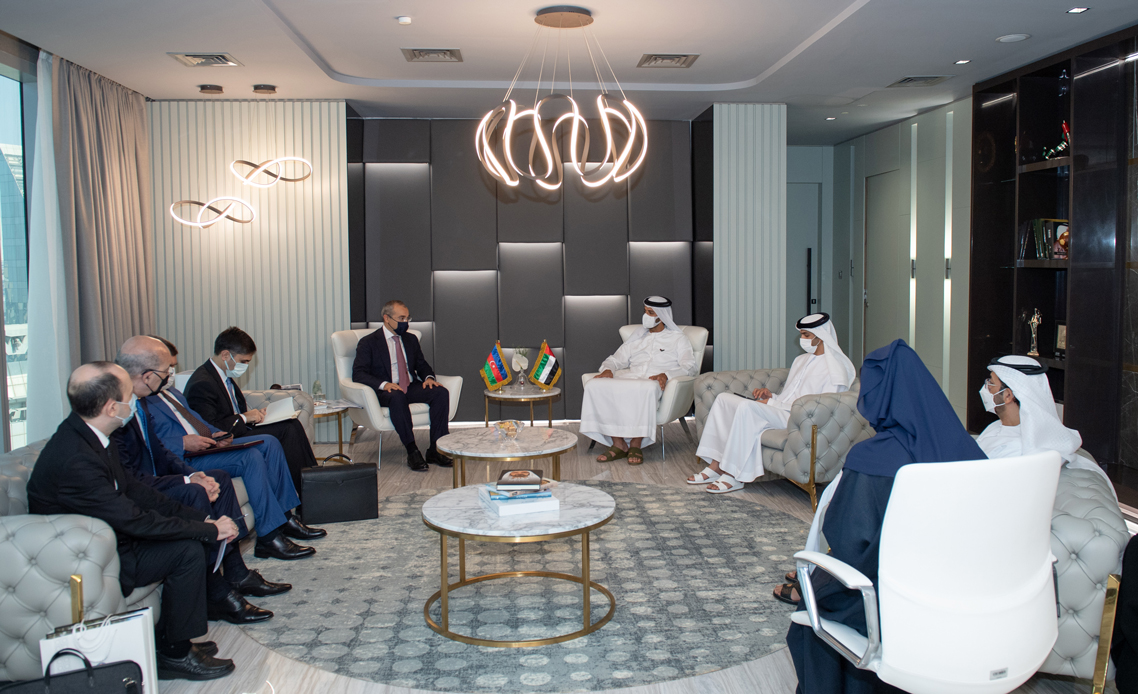 The Azerbaijani delegation headed by the Minister of Economy, Co-Chair of the Joint Intergovernmental Commission on Economic, Trade and Technical Cooperation between the Government of the Republic of Azerbaijan and the Government of the United Arab Emirates Mikayil Jabbarov is on a visit to Dubai, United Arab Emirates. The delegation is comprised of the Chairman of the State Tourism Agency Fuad Naghiyev, Deputy Foreign Minister Fariz Rzayev, Deputy Energy Minister Kamal Abbasov, General Executive Director of the Azerbaijan Investment Holding Ruslan Alikhanov, Chairman of the Board of the Alat Free Economic Zone Valeh Alasgarov, Chairman of the Board at the Garabagh Revival Foundation Rahman Hajiyev, and representatives of other relevant government agencies and entrepreneurs.

The Minister of Economy of Azerbaijan noted that the visit coincided with a significant period for the UAE, and congratulated the UAE on the Flag Day falling on November 3rd. The Minister stressed the high level of political and economic relations between the two countries and the important role of the political will of the heads of state in the development of cooperation. It was noted that mutual visits and discussions have a special role to play in defining new lines of our relations. The Joint Intergovernmental Commission between Azerbaijan and the UAE, the Azerbaijan Trade Representation in the UAE and the Azerbaijan Trade House in Dubai are effective platforms for the development of business relations. Azerbaijan's representation at Dubai EXPO 2020 also offers favorable conditions for new business partnerships and involvement of investments. The meeting also covered the economy of Azerbaijan, National Priorities of the country's socio-economic development until 2030 and measures taken to achieve the set goals.

The UAE Minister of Economy Abdullah Bin Touq Al Marri underlined the special importance attached by his country to partnership with Azerbaijan, the successful development of relations, and expressed confidence that the measures taken to strengthen multifaceted cooperation between the two countries will contribute to the implementation of new joint projects and the improvement of our economic and trade relations.

At the meeting, the sides discussed an aspect to develop economic relations.

At the meeting, Minister of Economy of Azerbaijan, Co-chair of the Intergovernmental Commission Mikayil Jabbarov said that cooperation between Azerbaijan and the UAE, based on the principles of mutual friendship and respect, is developing within the framework of international organizations and backed by mutual support, emphasizing its role in regional development.

Mr. Jabbarov noted that trade and investment cooperation is among the priority lines, and, despite the difficulties caused by the COVID-19, the dynamics of growth was observed in trade turnover. The event emphasized the importance of diversifying trade relations and the possibility of exporting Azerbaijani non-oil products to the UAE markets. Our country's active participation in expos and investment forums in the UAE widens the promotion of our local products in the UAE markets. The participation of Azerbaijani companies in Dubai EXPO 2020 is especially important for promoting our products and investment opportunities of our country.

Providing information on the investment attractiveness of our country, the meeting emphasized that Azerbaijan and the UAE have great potential for cooperation in the field of renewable energy sources, industry, tourism, digitalization, application of technologies of the 4th Industrial Revolution, development of small and medium-sized businesses, food safety etc. The Economy Minister spoke about the opening up of great opportunities by the liberation of our lands in terms of new realities and the development of regional cooperation, and about the work done to restore and reconstruct these territories, including the establishment of Aghdam and "Araz Valley Economic Zone" industrial parks, as well as the opening of Fuzuli International Airport. “Partnership in the Garabagh region, which has large resources in the spheres of industry, agriculture, energy, transit and tourism, can give an additional impetus to our mutually beneficial cooperation”, the Minister said.

Expressing his views on expanding partnership and satisfaction with the representation of Azerbaijan at the Expo, the Minister of Economy of the United Arab Emirates, Co-Chair of the Intergovernmental Commission Abdulla bin Touq Al Marri noted the successful cooperation between the two countries in several areas, and informed of the opportunities that Dubai EXPO 2020 opens.

The meeting focused on the prospects for enhancing trade and economic relations.

At the end of the meeting, the co-chairs of the Intergovernmental Commission signed a Protocol on the results of the 8th meeting of the Joint Intergovernmental Commission on Economic, Trade and Technical Cooperation between the Governments of the Republic of Azerbaijan and the United Arab Emirates. The Protocol provides for the strengthening of cooperation in bilateral economic relations, investment, trade, green energy, agriculture, food safety, innovation, logistics, tourism, healthcare, science, as well as creation of a Business Council and working groups to expand business relations between the two countries, partnerships between SMBs and encourage mutual investment.

A Memorandum of Understanding on Cooperation was also signed between the Small and Medium Business Development Agency under the Ministry of Economy and the Dubai Chamber of Commerce and Industry. The Memorandum provides for cooperation in expanding bilateral trade and business networks.

During the meeting, a Memorandum of Understanding was signed between the Center for Analysis and Coordination of the Fourth Industrial Revolution under the Ministry of Economy and the Dubai Future Foundation, which hosts the World Economic Forum’s Affiliate Center in the UAE. The document provides for cooperation in the application of digital solutions and technologies of the Fourth Industrial Revolution.